byEsta Media Network
An Aegean Airlines Airbus A320-200 takes off from the Eleftherios Venizelos International Airport, in Athens, Greece, May 16, 2016. (Reuters)

SULAIMANI (ESTA) — Greece accused Turkey of deliberately holding up a government aircraft carrying its foreign minister home from Iraq, leaving it circling for 20 minutes before granting it permission to cross Turkish airspace.

Turkey denied the accusation, saying the aircraft had taken off from Iraq without a flight plan but had been allowed to pass once one was procured.

Tensions between the two NATO allies, locked in a dispute over maritime boundaries in the eastern Mediterranean, have been simmering amid claims and counter-claims to marine areas thought to be rich in natural gas.

“It is one more provocation in Turkey’s series of provocations,” Greek government spokesman Stelios Petsas told reporters on Thursday (October 15). “I hope the incident is not repeated in the future.”

He said Greece’s foreign ministry had complained to the Turkish authorities.

Turkish foreign ministry spokesman Hami Aksoy dismissed the suggestion that the plane carrying Greek Foreign Minister Nikos Dendias had been deliberately held up as a provocation to Athens.

Dendias visited Iraq on Wednesday for talks with senior Iraqi officials including President Barham Salih and Prime Minister Mustafa al-Kadhimi. His trip to the Kurdistan Region was cancelled due to a technical issue in his plane.

“The plane in question took off from Iraq without presenting a flight plan. When the plane entered our air space, a flight plan was urgently requested from Iraqi authorities, and the flight was safely carried out after the plan was received,” he said.

He said Turkey had granted permission to a Greek request for the minister’s plane to pass over its air space en route to Iraq on October 14.

After that plane malfunctioned in Iraq, Greece sent a second aircraft which was also granted permission to fly through Turkish air space, “with the same flight permission number, without any delay”, Aksoy said.

Separately on Thursday, France and Germany accused Turkey of continuing to provoke the European Union with its actions in the eastern Mediterranean, and gave it a week to clarify its positions. U.S. ready to lift many sanctions but Iran says it wants more 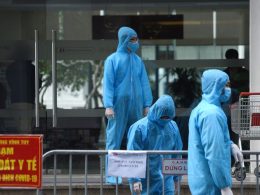