Police say 16 people arrested over attack on tourists in Erbil

SULAIMANI (ESTA) — At least 16 people have been detained over attacking a group of tourists in Erbil on Thursday night, Police said on Sunday.

In a statement, the Directorate of Police in Erbil said a group of people had attacked tourists near Family Mall in the city on the New Year’s Eve.

The security forces detained 16 suspects over the attack in accordance with Articles 413 and 477 of the Iraqi penal code, police added

“Anybody who has been harmed can visit the directorate of police in Erbil province in order to take legal measures against them,” police stated.

On Friday, Erbil governorate said 11 people were detained over the attack on the tourists who visited the Region’s capital to spend the New Year holidays.

The tourists were from central and southern Iraqi provinces, according to the governorate.

In a similar accident in Akre town, another group of people attacked a bus carrying tourists from central and southern Iraq.

Authorities in the town said the attackers would be brought to justice.

“It is profoundly unfortunate that a small band of troublemakers have in recent days assaulted tourists visiting the Kurdistan Region from Baghdad and other Iraqi provinces for the New Year celebrations,” he said.

“I condemn these heinous assaults in the strongest terms. They are contrary to our standards and values,” he added.

Barzani further said the Kurdistan Region continues to be a safe haven for millions of refugees and displaced persons from Iraq and neighboring countries and welcomes tourists across the world without discrimination.

“Every year, Kurdistan embraces hundreds of thousands of tourists. The assaults in recent days are wholly at odds with our well-known culture of peaceful coexistence and tolerance, and I reaffirm our commitment to hold accountable to the fullest extent of the law any individual or side trying to undermine it,” Barzani said. 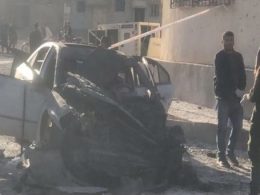